How Sweet (and fattening) It Is 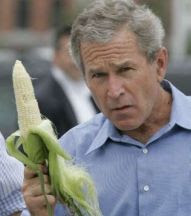 There’s a whole lot of shakin’ goin’ on. It must be time for that insulin shot. Or, everyone’s just a bit jittery because they’re not sure WHY corn refiners have petitioned the FDA to be able to change the name of the dreaded and infamous High Fructose Corn Syrup, to a more benign sounding and somewhat subversive name, Corn Sugar. Or whether it even makes a difference for that matter.

Today, there’s a lot complete ignorance about what goes in food. Because of that, a nutritionist counter culture (or the food punks, as I like to call them) has developed, where anything that might be possibly harmful becomes the topic of the week and the trendiest thing to avoid, without a necessarily complete understanding of said substance or additive. We’re all pretty familiar with the recent gluten free, grass fed, organic, GHB-free wave. (NOT a bad thing to have going around, mind you.)

In all of this, one of the original evils has sort of been out of the news, like Paris Hilton before her recent nose candy incident. High Fructose Corn Syrup has been, until last week, soooo 2007. However, there’s been a lot of hubub lately about whether or not they should be allowed to change their name to avoid bad press. Dear HFCS, while this tactic may have worked for Prince, I don’t think this will work for you. Or that it should be allowed. Go ahead, try and trick your consumers, but here’s the deal. I’ve compiled some information to arm our readers, so your propaganda and sneaky marketing won’t work. You ask, “what’s so bad about ‘Corn Sugar’?”
Here’s your answer:

So, whether it’s called HFCS, Corn Sugar, or some symbol that can’t be pronounced out loud, it’s bad. It’s evil. It’s satan. It’s Christine O’Donnell in sugar form (cheaper, simpler, and really really bad for America.) And the next time someone asks you, “What’s so bad about High Fructose Corn Syrup?” you’ll have an answer. Brought to you by your friendly folks at Bambu Batu.

Bonus Video: some propaganda from Sweetsurprise.com