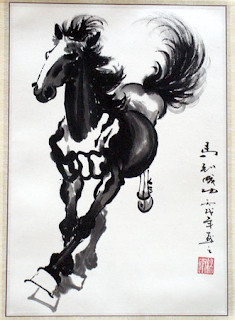 As we prepare for the major undertaking of relocating the House of Bamboo, it’s a good time to pause and reflect on the fact — sometimes hard to swallow — that everything is always in a state of flux. Or as the ancient Greeks were wont to say, “Panta Rhei,” that is, everything flows. And as other philosophers have pointed out, “The more things change, the more they remain the same.” The Tao, like a steady stream, is in constant motion, permanent transition.

Consider the following story, about a boy, the son of a hardworking peanut farmer in the inner Shandong province.

“The Boy and his Horse”  |  A Zen Parable from Bambu Batu

One autumn, at the annual harvest festival, the young lad is awarded a handsome young horse for having grown the largest peanut in all the province, some eight inches in length.

The boy gallops back to his village at top speed and shares the great news with his family and friends. Hearing the story and admiring the healthy steed, the boy’s father proclaims, “This is truly marvelous! What good fortune you’ve brought on our family.”

Over the course of weeks, the boy and his horse become inseparable companions. Productivity on the farm increases; the family is in high spirits. But one night, in a fierce storm, the horse gets spooked by thunder, breaks loose and disappears. The boy is devastated and grief stricken. “Oh, what a disaster,” his father declares.

Looking on, the Zen master scratches his chin and mutters, “We’ll see.”

Another week goes by, and one morning the horse is seen coming over the hillside, returning to the farm with a new mare at his side. The boy and his family are ecstatic. “What wonderful news, son!” “Yes, daddy, everything is awesome now!”

The boy now spends all his spare time — getting up early and staying out late — working in the stables to break in his new mare. She’s a healthy mount, but stubborn too. One evening after supper, the boy takes her on a run across the field. In the dim twilight she grazes an irrigation ditch and throws the boy from his saddle. A small crowd has gathered when the village doctor arrives. He makes a splint for the boy’s leg which has been broken. “He’ll walk again, but I’m afraid he’ll always have a limp.”

Another year passes, and kingdom is now in turmoil. Mongol hordes are raiding many of the provincial villages, and the emperor is recruiting soldiers from the countryside. When they come to the farm of the boy, now a young man, he is exempted from military service on account of his limp. “Oh, thank heavens!” his mother declares.

The Zen master, observing from a distance, just shrugs his shoulders and mumbles, “We’ll see.”

For more enchanted Zen Parables to tickle your mind and soothe your soul, be sure to check out Heaven and Hell, The Magician and the Prince, and Mind is the Forerunner of All Things.